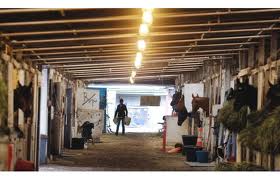 I spoke to an old and dear friend of mine the other day. He called to wish me a Merry Christmas. It must have been 3 years since I last spoke with him. When I was a kid he would call my brother and me ‘Meatballs’, the name stuck and we called him the Meatball. My father taught the Meatball how to shoe horses, he was a good student and made a living shoeing horses for many years (many years later he would return the favor and apprentice me in the trade).
Speaking to the Meatball sent me reeling back as often happens when its long periods between speaking with old friends. His life has changed quite a bit since I last spoke with him, so has mine. We caught up with each other but as always seems to happen when speaking with old friends sooner or later you get to talking about the old days.
Old days with the Meatball is the backside of the racetrack at Hastings Park in Vancouver. I have mentioned in previous posts that my father was a blacksmith, from as far back as I can remember my father shod horses. I never missed a chance to go to work with my father. The racetrack has such charm for a young boy, it was magical in many ways. The people were certainly different, people with names like ‘Big Pete’ and ‘Gumboot Lou’. Jockeys as small as us kids at the time. Then of course there was the horses, they were big and beautiful but there was a danger as thoroughbreds can be unpredictable at the best of times. You learned young to keep your eyes open and move out of the way quick, a run away horse could mean injury or worst. The backside of the track was a community all to itself, in many ways it was a carnival atmosphere. Many people lived their whole lives on the track, it was their home. They looked out for each other, and took care of each other. You didn’t get lost there as everyone knew who you belonged to, you just had to ask “have you seen my Dad?” and they would tell you which way to go.
Work on the racetrack was early business, it usually began about 5 or 6 in the morning, feeding, mucking stalls, exercising the horses, hot walking to cool them off. By noon the barns were quiet, horses back in stalls. Another day done.
Race days were the different. We would go home for a few hours then go back to the track feed the horses and make our way to the Grandstand. This is the part of the racetrack where people came to watch the races.
Hundreds of people would come in to play the ponies. They studied the odds, played hunches, bet on long shots, exacta’s, trifecta’s, just waiting for that one horse to come in for the big win. My dad would always tell me betting was not for racetrack people, it was for the Grandstand, meaning the people who came in to watch the races. He bet the occasional race, mostly his own horses, or if he got a tip about a horse from someone on the track. But he never thought about the big win, never bet more than he could afford to lose.
Those days we went to the Grandstand my father would hand my brother and I 5 dollars each, tell us not to get into any trouble, then he would head to the bar. Nowadays I imagine he would get arrested for doing such a thing. But we were always well looked after, we couldn’t go 20 feet without bumping into someone who knew us, them asking us if everything was alright. We knew enough to make our way back to the bar once it got dark and ask for our father. He would come out, we would watch a few races together. He would tell us stories between races, the sun going down and the lights coming up. I can remember clear as day the sound of the horses hooves, the shouts of the jockeys and the roar of the crowd as the horses thundered by.